A Short History of Spectacles

Glasses are such an everyday part of modern life, that it's easy to forget that some of the elements we take for granted didn't seem obvious to people at the time.  For instance, spectacles had been around for about 450 years before London optician Edward Scarlett invented "temple spectacles", which included the arms that fit over our ears. Prior to this, spectacles were a hand-held device: users gripped the glasses by the bridge between the lenses and held them in place manually (example below). The earliest recorded evidence of spectacle wear is a fresco in a church in Treviso, Italy.  Painted in 1352, it depicts Cardinal Hugo of Provence working at a desk.  This is about 70 years after crystal workers in Venice first created lenses for improving eye focusing in about 1280.  For over 400 years after this, glasses consisted of a pair of lenses held in a frame of bone or wood, and held in front of the eyes as needed. After Edward Scarlett's breakthrough idea of adding temples to frame fronts, spectacles could now be worn full-time, and developments moved more quickly.  Benjamin Franklin is credited with inventing (or at least popularising) bifocal spectacles in about 1760, which allowed clear vision at both distance and near in a single pair of glasses.  Bifocal lenses which run the full width of lens (as opposed to the now more common D-shaped reading segment), are still known as Franklin bifocals today.

Pince-nez designs, which did away with the temples and relied on a spring clip to hold glasses in place on the nose, became popular in the 1880s.  A drawback was that the springs were often very tight and uncomfortable, sometimes enough to restrict breathing.  A noted pince-nez wearer was US president Teddy Roosevelt, pictured below: 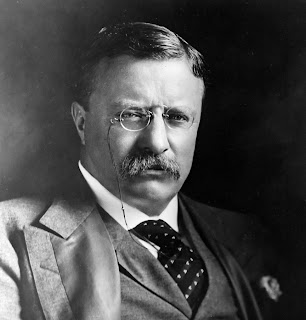 Sunglasses were first worn by Venetian gondoliers from about 1780, to restrict glare off the water.  Unfortunately these early sunglasses did not block UV light, and probably caused more harm than good.  Dilated pupils behind a dark but non UV-blocking lens actually allow more dangerous UV rays into the eye, increasing the risk of diseases like cataracts and macular degeneration.  A surviving example is pictured below.

It's interesting that distinctive male/female frame designs didn't start to appear until the 1930s.  Prior to that time, frames were small, round and unisex in design.  By the 1950s, glasses for women were styled in glamorous cats-eye shapes, and often decorated with gemstones, while male frames were stolid and square.  This video is a wonderful depiction of the frames and attitude of this era.  Christian Dior was the first major fashion label to release a branded range of eyewear in 1966.  They have since, of course, been joined by almost every fashion brand in existence. Progressive addition lenses, essentially a no-line advancement on bifocal lenses, were first commercially produced by French company Essilor in 1959.  The distortions in these early progressive lens designs made them uncomfortable to wear and limited their uptake.  However by the 1990s improvements in lens design and manufacturing meant that progressive lenses had replaced bifocals as the first choice option for wearers.

Spectacles today have evolved to a fairly standard system of a frame front + 2 temples, but with plenty of style and shape options to allow for individual taste and requirements.  Spectacle frames are now being 3D printed by innovative companies like Monoquool, or manufactured out of lightweight and non-allergenic materials like titanium.  Computer-controlled "Freeform" generators have allowed spectacle lenses to be more individualised, improving wearability and performance.

Most predictions of the future include some aspect of smart technology being incorporated into glasses.  Let's hope it's more successful than Google's failed Glass project, which never really took off, but still has to be acknowledged for it's ambition.

Troy graduated from the University of Auckland Optometry programme in 1995, and has worked in optometry practices in NZ, Australia & the UK since then. Along with wife Stephanie, he has owned and operated Cassidy Eyecare in west Auckland since 2010.